As well as our own Nikon cameras, we also run with Canon EOS series of cameras. These are typically used in our eCommerce studio shoots for major online retailers and work in a highly organised workflow to speed up and streamline image production for eCommerce websites.

This week, we’ve been using the new 50 mpx Canon 5DS for the first time. The obvious reaction from anyone with the most basic of camera and web imaging knowledge is “Why on earth do you need 50 megapixel images? Surely web images need to be small?’ And indeed, they’re quite right, but the Canon 5DS is here for other reasons, not just the huge imaging size.

Until now, the Canon 5D mk2 and mk3 have been the cameras in use. They are mounted on a fixed tripod position and shoot ‘tethered’ into a computer workstation. This gives us several benefits, including the ability to see instantly on a large screen the fine detail of the product we’re shooting, plus of course there are no memory cards taking up download time in our worksflow. The image is imported instantly into our editing software, then a series of actions are performed to make the images ready for use by our client.

The big issue with the previous Canon EOS 5D series was the well known weakness of the USB connection in the camera. This was mounted directly to the camera’s memory board and with no strain relief for the cable, the constant load eventually resulted in failures needing to be sent away for repairs.

The new Canon 5DS has a different mount for tethered shooting, so we’re pretty confident that this issues will now be a thing of the past. As for the 50 megapixel image size? Well, 144 mb images certainly put a strain on your workflow and computer processing power. This, of course, works it’s way down the line, through storage capability, the automated actions we have set for fast workflow, plus of course other members of the team who work on cutouts and layouts are all impacted.

However, it’s certainly useful to have as large an image file as this. After all, if the call comes to create a banner right across Heathrow Terminal 5, we probably have an image on file that would do the job! 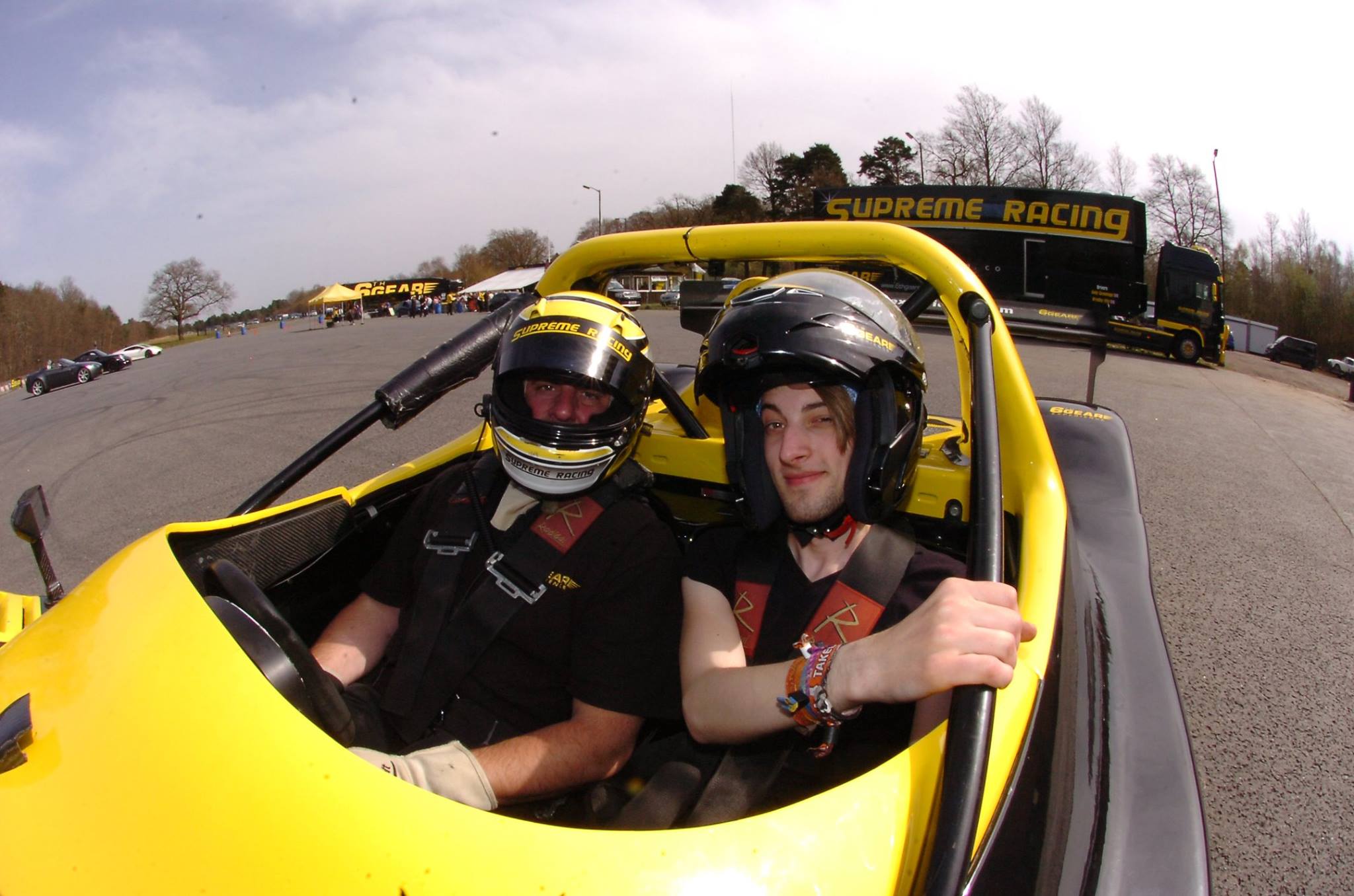 Most photographers prefer to be behind the camera. That’s one of the reasons why you never see us in family albums at Christmas time. We prefer to make you smile, while we remain anonymous. However, last weekend at Chobham in Surrey, our event photographer Lee Cooke got the chance for a passenger ride.

And it wasn’t in just any old car, but in the Radical prototype racing car run by 6th Gear Experience director Andy Cummings. Andy races an identical car to this one in the Radical sports prototype racing series across Europe, so his idea of a relaxing afternoon is scaring passengers witless in a series of high speed rides in the Radical. Our first picture shows Lee with his very best Nervous Smile at the pitlane exit. The image below was captured by the quick reactions of our trackside photographer as the pair took the chicane flat out at the end of the lap. The fine detail of the shot clearly shows Lee’s white knuckles on the roll cage. We’d ask him for a comment, but he’s not begun speaking again just yet…. 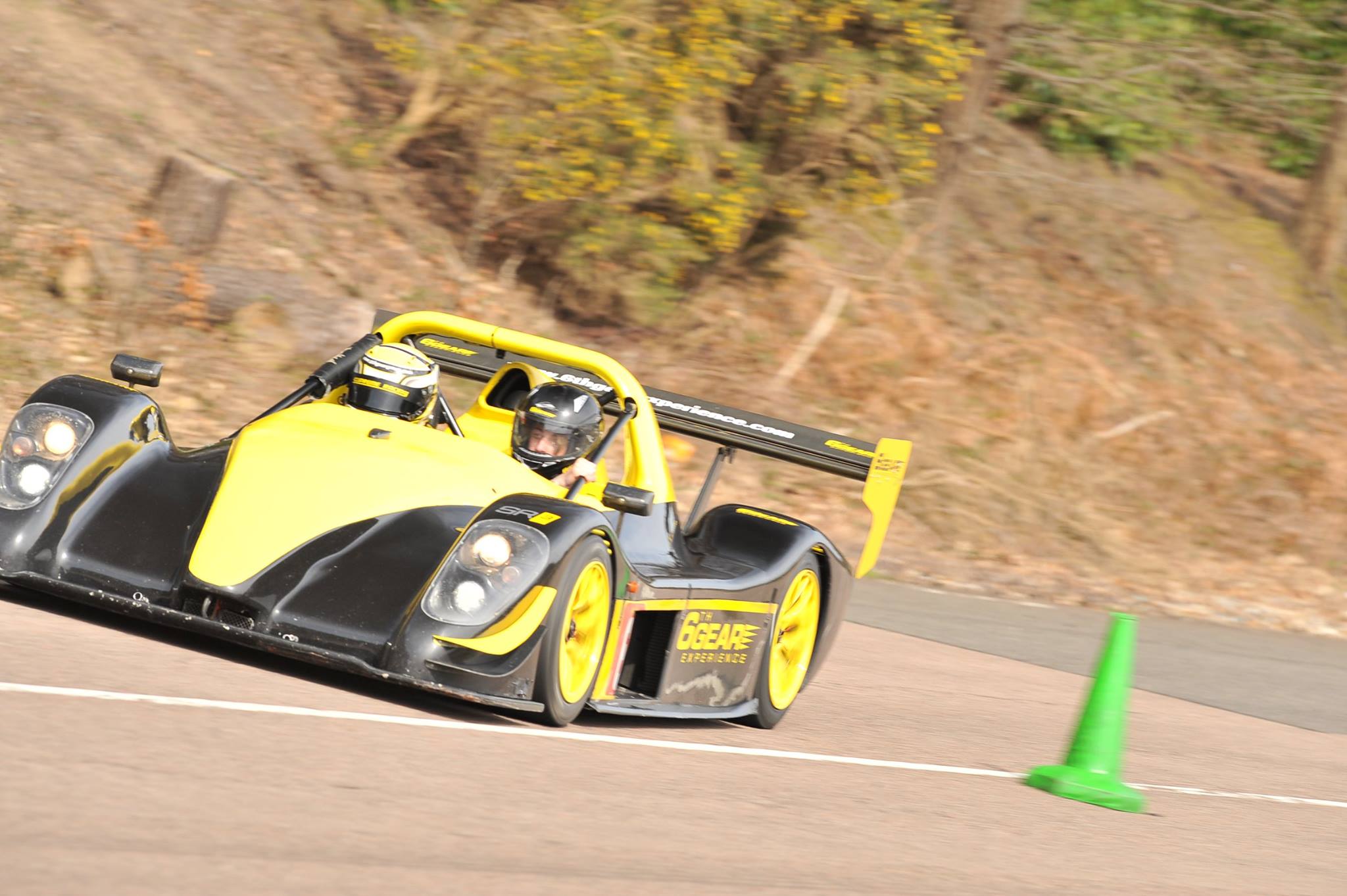 A quick picture to share with you grabbed by Marc at Goodwood last week. We shoot quite literally tens of thousands of supercar pictures each year, capturing that perfect moment for guests on driving experience events. Most times, the car is a state of the art exotic Italian Ferrari or Lamborghini. But a quite different driving experience package is this car from Mythrill Racing.

Based at the beautiful Goodwood circuit, they operate a fleet of classic cars for customers to drive on track. This classic Mustang is one of the cars available to drive, along with E Type Jaguars, air cooled Porsches and even classic Aston Martins. No traction control, ABS brakes or other modern aids, this is track driving in one of it’s purest forms. Mythrill Racing’s website shows the full details of the classic cars they have, take a look here

We’re quite pleased to read some very significant news in The Guardian about Next profits rising by 12%. This means that for the first time, they’ve now overtaken Marks & Spencer. Next have long been considered to be a ‘little sister’ to M&S, but no longer. For us, the exiting part of this increase in profit is that it’s almost 100% derived from online sales.

Why are we so thrilled by this? We’ve been working hard with Next for more than a year now, constantly improving the product photography used in the online stores to depict the products you can buy from Next Online and in their catalogue. With store sales up 1.7% but online sales increasing by 12% it shows that good photography to accurately depict your items for sale is now more important than ever.

We’re currently working with several other retailers on ways to improve the customer experience online through quality product photography and it’s an exciting time for us. If you have an online store with a range of products, we can help you improve your success in selling online. Drop us a line for a chat about ways to achieve this, we’re always happy to discuss this fascinating area of online selling.